The flexibility of the HKUST MBA program allowed Lin Yuan to extend his three-month MBA internship with BASF. He’s now set to start a full-time role with the firm

‘Be like water, my friend.’ Lin Yuan says the Bruce Lee quote has guided him throughout his career. Be flexible; adapt to your surroundings; be prepared for change—those are the biggest learnings Lin says he got from his MBA at HKUST Business School.

Lin is one of thousands of MBA students around the world thrown into the uncertainty caused by the COVID-19 pandemic. As business schools were forced to adapt, Lin explains that the flexibility of the MBA at the Hong Kong University of Science and Technology’s (HKUST) Business School has allowed him to thrive.

After an MBA internship with German chemical giant BASF—the world’s largest chemical producer—that was initially supposed to last three months, Lin has spent nearly 11 months with the firm. He’s now set to start a full-time role with the company’s strategic marketing team, overseeing the whole of the Asia Pacific region.

Lin was born in China before migrating to Australia at the age of seven. A business degree from the University of New South Wales followed, along with the start of Lin’s career in sales. He spent time with chemicals company Linde before moving back to Asia to join consumer goods company RB.

Australia’s smaller market size was dwarfed by the pace of change and growth in Asia. That meant opportunity and a time for change.

“At that time, I’d been working in sales for seven years, in different industries, and I felt there was more room for growth,” Lin explains. “I felt like I lacked exposure to the breadth of the business world.”

He had two options: To either switch industry or function, or to study for an MBA. Lin chose the latter and HKUST.

“I’d always wanted to come back to Asia believed that this is where everything is happening,” he says. “Knowing a bit of Chinese there was no better place in Asia for me to develop.

“Hong Kong as a location has the best of both worlds, east and west. It’s a two-hour train ride to Shenzhen, or a two-to-three-hour flight to anywhere South East Asia. I saw it as a strategic hub.” 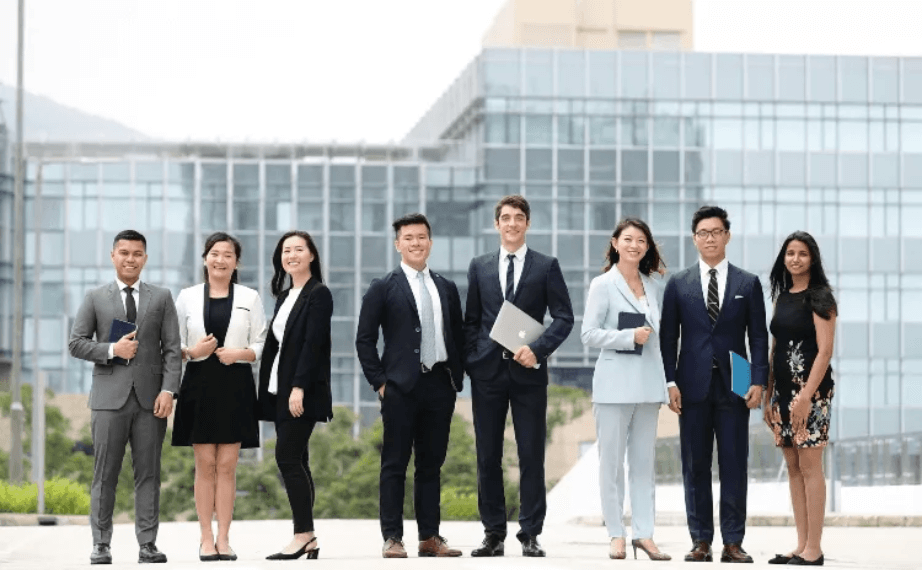 The flexibility of the HKUST MBA

Lin describes the classroom on the HKUST MBA as the catalyst for his broader understanding of business. The class of 2020, for example, was made up of professionals with an average age of 29 from consulting, finance, accounting, HR, IT, marketing and sales, operations, and logistics. 96% were non-local.

“The MBA is a melting pot of most people you’d find in the world all coming together and letting themselves learn and develop for 16 months. You rarely find that in an organization or a day-to-day role,” says Lin.

“Not only do you enhance your own skills in terms of showing people what they can learn from you, but you also look at other people and learn from them.”

The flexibility of the MBA curriculum also allows students to tailor their education to their chosen career path. Only about a quarter of modules are core courses, with nearly three-quarters being open for students to select as electives.

The value of an MBA internship

The flexibility of the HKUST MBA extends to students’ internships. What began for Lin as a three-month internship with German chemical giant, BASF, extended to 11 months.

He explains that when COVID-19 caused mass disruption and his MBA exchange with NYU Stern School of Business was delayed, BASF offered to extend the internship to bolster his practical education. He was also able to postpone classes for two months to go on a business trip to Shanghai and has since been offered a full-time role with the firm, which he’ll start alongside his virtual exchange with NYU.

HKUST were open to Lin working full time during the MBA internship and taking classes in the evening at the school’s building in the central business district of Hong Kong. He’s been working in the day and starting classes around seven in the evening.

Lin adds that the student visa he’s on in Hong Kong requires the school to approve a set number of hours for work. When his internship terms changed the school adapted, he explains, and approved his extra hours.

That flexibility has also led to better networking opportunities for Lin. Evening classes are also mixed with HKUST’s Part-Time MBA students too.

“The part-time guys are great as most of them have a stable job in Hong Kong, and you can have a conversation with them to learn about their industry’s environment, or where you want to take your career,” explains Lin.

“We’re highly encouraged to mix with the part-timers on assignments to broaden our network during the MBA to achieve our career goals in the future.”

The flexibility, learning to be agile, and adapting to the unexpected have all led Lin to his post-MBA career with BASF, something he says he wouldn’t have been able to achieve without the degree.

“I think for me that’s the mindset you have to take. You have to be like water, be flexible and agile in situations, which is a lesson you take for the rest of your life, as well as in the business world,” he concludes. “It all starts with the mind, and then you'd be surprised at all the opportunities that surround you."

Bain Consultant Salary | What Could You Earn At Bain & Company?